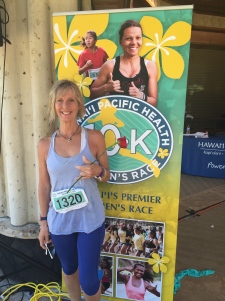 I realize it’s been 3 weeks since I have written about The 5 Day Warrior.   Life gets in the way when you’re making other plans-:).

Our time is precious and few. I never want to lose sight of this fact, and I am honored that you are taking time to read my writings.

My husband joined me for The Woman Only 10 K (6.2 mile) Premium Woman’s Race for Pacific Health in Kapiolani Park in Oahu Honolulu.   It was their 38th year with women of all ages including the first Keiki (young girls) race as well.

Some of the proceeds go to the Not-For-Profit hospitals to raise awareness and educate women on health and fitness with fun activities and educational stations.  They had pre-clinics on running, dynamic stretching, nutrition, all with physicians offering their expertise.

This is one of the most challenging yet, beautiful courses started in Kapiolani Park, headed to Diamond Head and back through Kahala.  Had I known that ahead of time, I’m sure I would have opted out.  However, sometimes ignorance is bliss.

The diversity of the racers was massive: from all ages and nationalities, to elite runners and novice runners, walkers and even a stroller division. The course was certified, meaning you can use your time to qualify for another race.

We showed up at 6:15 a.m., with music and dancing, already underway.

Miss Hawaii was there along with all of the other pageant winners from each city vying to take her place as she finished her term.

Being a non-runner except when the spirit moves me which averages about once every 2-3 months, I told myself I would just walk the course if need be.

10 minutes into the start of the race, I was ready to STOP!  My lungs and legs weren’t prepared, but I was determined to run despite the fact that I told myself I could walk if need be.

A client asked me how long it would take me to finish, which wasn’t a question I even entertained.  “As long as it takes” was my answer, but being pragmatic and goal oriented he thought  it would roughly take an hour.  The very thought of running one hour sounded preposterous to me, but I humored him.

There is not one ounce of me that likes to run.  In the old days I might run for a quick 30 in because it did the job faster and I could be done with my workout sooner.  There were a few times I can count on my hand that I got the runners high people talk about.

I picked a woman out of the crowd that seemed to be about 4’8 with the tiniest feet who wore neon pink shoes whose stride was so short, figuring I could track her and pass her at some point.

The conversation in my head was the same the entire race, “track the pink shoes”.  Sometimes I couldn’t find them because she had gotten so far ahead of me, other times I almost caught her.  I thought I could just walk, but when I checked in with my body and adjusted my stride, my hips creaked, I kept going, listening to the small voice that said, “but you can do this and yes you can stop, no problem if and when need be”.

A Mai Tai sounded really good about now, I thought, but at 7:30 a.m. I would end up at Kapiolani Park with the AA group, and I didn’t want that.

I played games in my head:  keep one more layer of clothes on until the next mile, find the pink shoes, focus on the beautiful water.  Women older than me would pass me, and then younger ones in there 20’s would walk.  I wanted to adjust every runners posture and gait.  Some I thought I’d never catch and did, others surprised me that passed me with their forward head and hunched posture.

I considered my client Jason, who figured it would take about an hour, every time I wanted to walk. I’d say,”you can but do you need too?” in my head.  His question kept me honest, as I’d asked him that question or something of such at least 100 times before.

Mile 6 nearing the finish line I tried to sprint but my legs were like lead in search of the little neon pink feet that were no where to be found.  Finally, I spotted them crossing the finish line way far in front of me. I was so grateful to have had her to keep my focus and give me the courage to finish the race, I ran to catch her and thanked her for being an anchor for me but she couldn’t speak English. Instead she shook her head and smiled graciously.

I was handed a red rose for finishing, and a bag with an amazing dry fit shirt along with other surprises.

Line dancing with music and all sorts of goodies for breakfast were provided.  Awards were handed out and about 15 of the women that had participated for all 38 years were acknowledged.

Despite the fact that I am not a runner and neither is my husband (he finished right beside me:  the only male)  it showed me that our hikes do make a difference in keeping us in shape.  It also showed me the power of listening to yourself, drawing on the power of your mind and listening to the small voice that says “I can!” while all the while the loud voice says, “Stop, are you crazy”?

My time? 1 hour 7 minutes 27 seconds.  Nothing earth shattering but again that wasn’t my goal.

As I watched the 84-year-old woman who was the only one in her age group stand up to collect her 1rst place award, I understood how people get running fever.

Sitting on the beach that night with my Mai Tai in hand, I considered the next race. Maybe, I could beat my time for next year; which made me, chuckle.

Since I’ve been home I’ve been running twice a week for about 4 miles each time.  I still don’t love it but it’s gotten a bit easier SOME DAYS!

No promises but with the help of the ocean, music, wonderful woman, my husband and a Mai Tai at the end It’s sounding pretty good at the moment.

Welcome to my blog.

Thank you  so much for stopping in and visiting me.

I hope life finds you well and you enjoy my stories, quotes, poetry, health and fitness articles and other musings.

Life is meant to be shared and I do hope you find some pearls of wisdom and aha moments that give meaning to your day; perhaps a chuckle, something to ponder, growth, light, insight and joy.

As a Health and Wellness Professional, I am inspired daily by my clients and friends who continue to inspire me to be my best self! One of my favorite parts of blogging is sharing our thoughts openly and candidly in support.